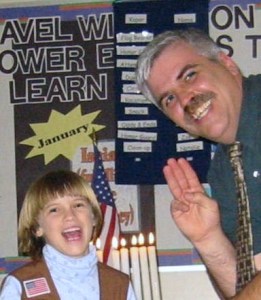 Pictured here: Mike Berg with his daughter Sarah as a Girl Scout Brownie. Mike is a Leader of Troop 990 in Sterling, VA.

It  was seven years ago–when my next door neighbor/Service Unit Manager asked me to lead my daughter’s Girl Scout troop–that I learned in addition to “dad” I was to be called “Man in Green.”  I had not a clue what this honorary title meant, and it is only now that I have given the name any serious thought.

Although these positions have given me greater insight into the Girl Scout experience, of all the things I have done as a Man in Green being my daughter’s Troop Leader has meant the most to me.   I have had the opportunity to watch the nine girls in my troop grow both individually and together.  We have camped, canoed, hosted dances, and taken a trip to Savannah, Georgia for a week.  I would not trade my experiences as a “Man in Green” for anything.  Being there with my daughter as she achieves her goals has been my greatest joy both as a leader and a father.

In the midst of writing this I realized that the definition of a “Man in Green” is how he, the man, defines it.  It can mean being a leader, working with the troop as a committee member, serving on the Service Unit Team, camping, training, or just helping out whenever and wherever you can.

I am proud to contribute to the Girl Scout movement as a father and a “Man in Green.”