As a Congressional Aide, Girl Scout Madeleine R. spent a week shadowing the office of Representative Gregorio Sablan. Madeleine writes about her experience below. 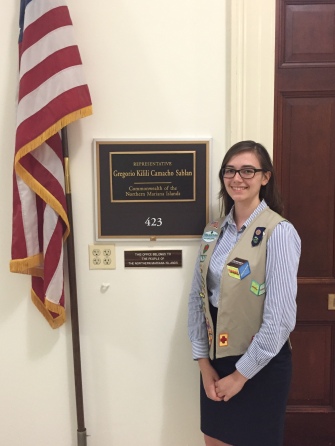 Working on Capitol Hill for a week was like nothing I had experienced before. Not only did it give me some insight as to what Congress is like behind the scenes – I also gained some experience in what professional working life is like. I have to say, from the commute to the clothes to the social interactions, professional life is much different from anything that is experienced in school.

The most stunning part about my week, though, was not the experience of professional working life, but how the experience added on to my education. I had taken a course in government a couple of years ago in school, and I found that working on Capitol Hill gave me the opportunity to apply what I had learned and see it in action. It felt nearly surreal at times, as though I were a fictional character in the midst of a plot I had only had a general idea of before. Before working as a Congressional Aide, I had learned how the government – Congress in particular – worked, but watching staffers entering and exiting offices and rooms, seeing Congresspeople meeting their constituents and interacting with interns, and hearing the buzzers calling for quorum calls, adjournments, and recess added a whole new dimension to my previous knowledge.

As a Congressional Aide for Congressman Sablan of the Commonwealth of the Northern Mariana Islands, I ran errands, went to briefings, attended a reception with the rest of my office, went on a tour of the Capitol, worked on Mr. Sablan’s personal project for his constituents, and even attended two hearing. I had high expectations for what I would see and do on Capitol Hill and I wasn’t let down. In fact, my experience surpassed my expectations.

I hope to have another experience as exciting and enlightening as this one in the near future.

My advice to any 2016 Congressional Aides is to always be ready and willing to work, ask questions, and to just enjoy your time on the Hill!